One of the best tools frequently used in multisensory methods is a set of reading and spelling cards.

These cards really help to build the automatic association between ‘letter(s)’ and ‘sound(s)’. In this way, they act as powerful memory triggers as well as tools for ‘overlearning’.

The teacher presents a card on the front of which the target ‘letter’ is printed in upper and lower case (e.g. < t > and < T >).

The next step is to ask the children to draw a picture on the back of the card of something whose first ‘sound’ corresponds to the target ‘letter’ (e.g. a table).

On this card, which has a different colour, the target ‘letter’ is printed in cursive style, as well as the keyword.

Here are some examples of reading cards: 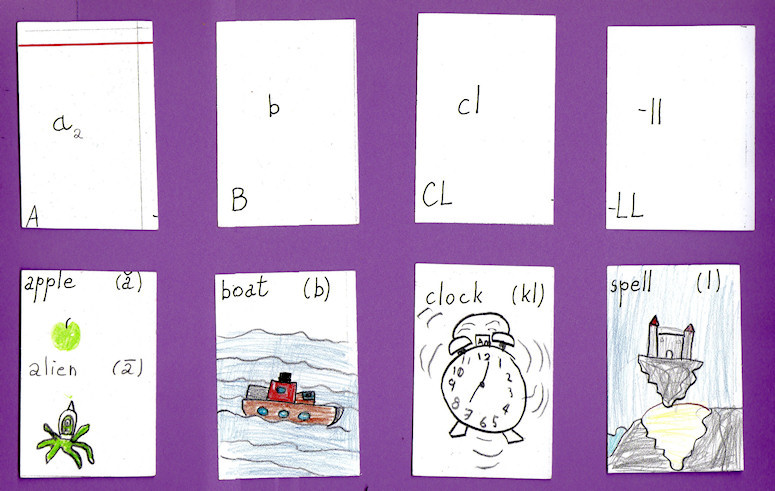 Here are some more examples of spelling cards, as well as the three cards corresponding to the progression just described for [ f ]. 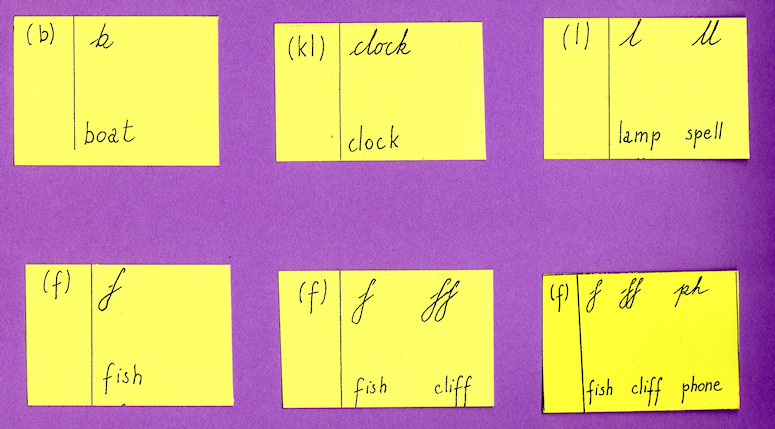 The spelling card corresponding to ‘sounds’ which are spelt differently in different positions in words is usually divided into three columns (beginning or open syllable, middle, end).

For example, [ â ] is usually spelt

Then you teach the less common correspondences and add them to the card, for example:

One can also make ad-hoc reading and spelling cards for more challenging correspondences. For example:

The cards for each lesson can be gathered into packs, the ‘reading pack’ and the ‘spelling pack’, for systematic and rapid revision.

The ‘reading pack’ is put in front of the child. For each card:

Here is Joshua revising the reading pack for the correspondences which he has already been taught.

The ‘spelling pack’ is used by the person helping the child. For each card:

In due course cards which are mastered are taken out of the packs, and new cards are added. The packs should normally have between 30 and 50 cards.

If possible, review the packs with children with dyslexia every day, or at least three times a week. This only takes a few minutes.

Alternatively, ask the children to revise the cards with their parents or the ‘home’ support network as often as possible. But do take care that the instructions for use are clearly explained: write down the steps to be followed and always stress the importance of pure, isolated sounds. In particular, be sure to make ‘home’ aware that the ‘sounds’ have to be pronounced in isolation, if it is helping the child revising his or her reading and spelling pack.

Sections in this course