Outline of the two regions of the brain involved in reading

The brain is divided into two hemispheres which are connected. It consists of billions of cells of which there are many types with different functions. Specialised cells called neurons communicate with each other extremely fast. Below is a schematic representation of the brain from above showing some of these connections. 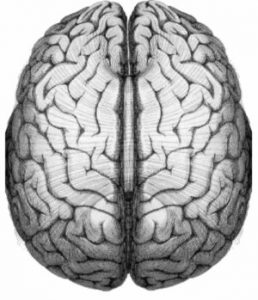 In most people the left hemisphere is largely responsible for the comprehension and production of spoken and written language. Below is a picture of the left side of the brain. 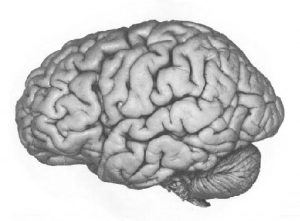 When we read, we activate complex circuits in two principal areas of the brain which have multiple interconnections, some bidirectional:

Take a look at this animated diagram:

Please note that the areas and pathways shown in these diagrams are entirely schematic. They are taken from Dr Duncan Milne’s book, Teaching the brain to read, and are designed simply to illustrate the areas and systems involved in reading.

This region deals with:

The recognition and pronunciation of complete words

In the course of our lives we hear many instances of the same word. These are pronounced by different speakers who have different voices, ways of pronouncing, rates of speaking, etc. Also, a word is never pronounced in exactly the same way twice, even by the same person. Finally, each word can be pronounced in an infinite number of contexts.

So there is a lot of variability across all the instances of each of the words that we hear and learn.

How then can we be so fast and accurate at recognizing spoken words despite this variability?

This is because we have progressively built representations of them in our brain, i.e. abstract entities which do not take into account the variations or deviations which are not relevant for meaning, relating for example to the voice, the accent, speed, or context.

These representations of spoken words, which we learn in the course of our lives, are stored in the auditory region of the brain and progressively make up a whole dictionary, called the phonological lexicon.

The recognition and pronunciation of units smaller than the word

This function develops as the child becomes aware of the fact that words can be analyzed into smaller units of sound called phonological units. The examples below will help you understand this process.

There are three kinds of phonological unit smaller than words that are relevant for learning to read: Syllables, Onset and Rime, and Phonemes.

Syllables have a mandatory vowel and may start or end with optional consonants:

The syllable in turn can be broken down into smaller units

The onset is the consonant or group of consonants preceding the vowel of a syllable:

The rime is the vowel in the syllable together with the optional consonant or consonants that follow:

This phonological unit is the basis for relating words to each other in songs or nursery rhymes for children, and poetry. It starts to present the notion that words that sound alike are likely to look alike.

Hence, nursery rhymes are an excellent way to sensitise children to the similarity between phonological rimes across different words.

For example, [sat ], [bat] and [pat] rhyme because they have the same phonological rime.

These are the smallest phonological units underpinning speech sounds which can alter the meaning of a word in a language. For example, in English the words [kat] and [bat] differ because they have different initial phonemes (respectively [k] and [b] ).

As the child starts grasping the broad idea that spoken words can be broken down, they develop phonemic awareness, that is a progressive awareness of the phonological units.

They go from the largest – the word and the syllable – in nursery school to the smallest – the phoneme – when they start to read and write.

Just as we have explained for words, phonemic awareness involves the building of representations which are not simply sounds or sequences of sounds, but their abstract entities, which:

For example, consider how we recognize the sound [t]. It may be uttered by a man or woman, old or young, or a foreigner. It may be said before, at the beginning, in the middle, or at the end of the word, that is, before of after nearly any other sound of the language, all of which will slightly change the way it is pronounced.

We are able to recognize the sound [t] despite all these sources of variation because we have developed an abstract representation of this sound, which is a ‘list’ of characteristics that we need to hear in combination in order to recognize that it is the sound [t]. The list of characteristics is different for each sound of the language as it corresponds to the specific positions taken by the articulators, that is the lips, teeth and tongue, as well as the vibration of the throat of the speaker, as he or she utters each sound.

As will be explained, phonological awareness, and especially the awareness of phonemes, is paramount for learning to read and spell.

For ease of reading, we will often refer to phonemes as sounds in the rest of this course, keeping in mind that what we refer to are more abstract than actual speech sounds.

This region has two functions used in reading.

In the course of our development we also encounter many different instances of each written word, which differ in terms of font, style, height, and which can be written in upper or lower case.

Despite these variations, we learn how to recognize written words very quickly and accurately because we have developed representations, or abstract visual forms, of these words. These representations are made up of units (letters or groups of letters) whose forms and relative positions are coded.

For example, we quickly and easily distinguish

even though they share letters which are either exactly the same (the last two) or have very similar shapes (the first).

even though these two words share exactly the same letters, because the first and last letters do not share the same positions in the two words.

The representations of the written words that we progressively build in the course of our lives are stored in the visual region of the brain and also make up a dictionary, called the orthographic lexicon – sight-word vocabulary.

In the visual region of the brain, we also develop representations that allow us to identify individual letters corresponding to the ‘sounds’ of words, regardless of the font, case and style of these letters.

For example, consider how we recognize the letter ‘t’. It may be big or small, written in printed or cursive style, in lower or upper case, or in a fancy font which adds curls here and there to make it prettier.

As long as it displays a more or less vertical stroke together with a horizontal stroke which crosses the vertical stroke towards its upper end, we will recognize the letter because, through repeated exposure to all the different forms it can take, we have built an internal abstract representation of the letter ‘t’.

However, for ease of reading, we will often refer to graphemes as letters in the rest of the course, bearing in mind that they can correspond either to single letters or to groups of letters.

Given that learning to read and spell requires mapping spoken words and sounds (phonemes) to written words and letters (graphemes), and vice versa, the visual and auditory regions of the brain will have to establish multiple, complex and bidirectional connections in the course of learning.